As much as I love keeping up with all that’s being said on the Internet and staying connected to my friends and colleagues on social networks (hell, I’ve made a career out of doing so), one of the things I love most about travel is the opportunity to unplug and get away from all that. Even when I rent an international cell phone and check my email while abroad, it’s far less frequent. It makes the long awaited trip truly feel like a vacation.

Lucky for me, “tuning out” has been a much discussed trend for 2012. People who have experienced social media overload are now finding more and more ways to tune out in their everyday life, not just when escaping to a foreign country. I wrote about this on the DeVries blog earlier this month:

Unfortunately, the trip to Mexico didn’t pan out (I knew there was a chance it wouldn’t), but I’m making every effort to plan my next international adventure – and looking forward to the next opportunity to put my phone on airplane mode for ten days and truly disconnect. 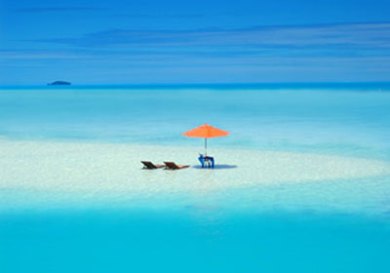 So, it turns out I really love big crowded events that massive amounts of people flock to.  I didn’t realize this until I found myself in DC the weekend of October 30th, going to Jon Stewart and Stephen Colbert’s Rally to Restore Sanity and/or Fear.  Armed with our posterboard signs, Joya and I walked over to the national mall, where we became so smushed in a crowd of people that we couldn’t even see the jumbo screens set up around the mall, let alone the actual stage where the various performances were taking place.  Sure, we had a few good laughs at some of the wittier signs around us, “Save Jon Stewart, he’s our most important Jew,” and “Mr. Stewart, my mommy says you’re my daddy, but all I want is a hug,” (ok, that was my sign), and “Rally to Restore Santa,” held up by a man dressed as Santa Claus.  But when out of nowhere, Cat Stevens took the stage to perform Peace Train, we were all pretty startled and amazed by what we were about to witness.  First of all, who knew Cat Stevens was allowed back in the country after being put on the no fly list because of his pro-Muslim sentiment?  Second, we never thought we’d hear Cat Stevens sing this song live, in our lifetime.  Third, the performance made us understand what we were doing there.  It didn’t even matter that seconds later, he was interrupted by Ozzy Osbourne playing “Crazy Train,” as part of Colbert’s schtick – we all got the message loud and clear.  Jon Stewart brought this Muslim man on stage, a man who was also known for his song about peace during a time of political and global unrest, quite the antithesis of what Muslims are usually thought of in our country.

It was pretty damn inspiring. 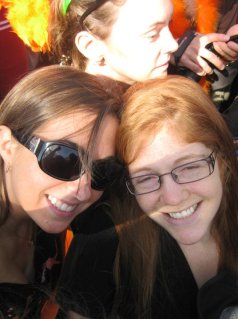 I went home to New York the next day, only to meet two of my friends an hour after arriving back in the city to march in the annual Village Halloween Parade.  I hadn’t celebrated Halloween much that weekend, and marching in the parade sounded like a fun idea – I had been to the sidelines to watch the parade and it had been a disaster in years past, but marching sounded less intense for some reason.  And it was.  Waving to groups of Asian tourists in my Dorothy costume was one of those incredibly unique New York experiences that I won’t soon forget.  I plan to go again next year, but in a much less generic costume.
This Sunday, my best friend Drew ran the New York City Marathon.  I went to watch the marathon about half a mile from the finish line so I could see her as she passed.  But in the 45 minutes before she came running by, it was really incredible to watch these thousands of people who were about to complete a race that started 4-5 hours earlier, took them through all five boroughs, and was about to give them the feeling of accomplishment that only incredibly dedicated runners can ever obtain in a lifetime.  I even caught a glimpse of the Chilean miner who had been rescued two weeks earlier after being trapped underground for over two months.  Talk about dedication.  Also, walking through the streets after the marathon, whenever we saw people with the signature “burrito” wrapping signifying their completion of the race, we went up to each person to congratulate them.  Some people were wincing in pain and limping, but it seemed to lift their spirits when we, strangers on the street, stopped to tell them how proud we were. 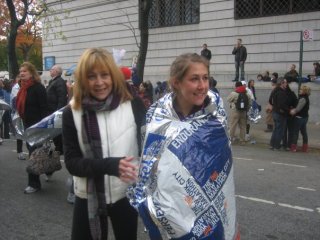 So apparently I like big crowded events that have widespread meaning and cultural significance.  I guess it’s like having school spirit.  And I’m always going to be a cheerleader for uplifting events that bring all types of people together for one unified cause, from a political rally in the nation’s capital to a silly Halloween parade.

It’s hot and sticky out, and Atlantic City might be one of my least favorite places, but we’re really lucky to be here this weekend because it’s my grandma’s 90th birthday, and she loves gambling. Needing a break from the casinos, we decided to take a walk on the boardwalk.

Nest was featured at a Pure Yoga event on the Upper East Side a few weeks ago. The event showcased several women entrepreneurs, mostly beauty, health and wellness professionals, and in an effort to help other women based businesses around the world, all proceeds went to Nest.

At the event, I was interviewed by Cortney Renee, a model/blogger with a passion for philanthropy. She writes about companies that work towards making a difference. I look very short next to her. Enjoy!
http://www.youtube.com/watch?v=nbZPDqdg_cc&feature=player_embedded 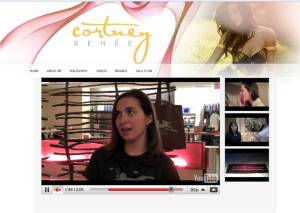 It’s a truly amazing feeling when you see a stranger walking down the streets of NYC wearing a bag made by the people you work with and met personally in Guatemala. Wow. And apologies to this woman who I just accosted.

From the minute I set foot in New York after returning from Morocco – actually, from the bus in Morocco when we started full-fledged event planning via Joya’s blackberry – all free time has been spent planning our Nest spring event. Joya had the brilliant idea to become a member of a beautiful garden in the East Village so she could rent out the space to hold our event. With weeks of planning, numerous pleas to the rest of the board to donate anything they could, securing food sponsors, sourcing opaque cups per the garden’s requirements, finding tables, and even sourcing electricity from the bar next door, it was quite a feat. Exhausting, but on the evening of May 25th, it all came together beautifully. I left work early to set up, and with the help of my parents who drove in from Long Island with folding tables to place product, food and drinks on, we were up and running by the start time of 6:30 p.m.

The weather was amazing – temps in the 70’s, not a cloud in the sky. My amazingly generous friend Matt brought his band Yellowcake, who came up with a Latin/Funk set which set the atmosphere for this wonderful summer evening. It was great to see some of the other NYC board members who I hadn’t seen in months, and it was wonderful to finally meet some of our enthusiastic volunteers in person after emailing back and forth for so long. I may have even hooked one girl up with a job and another up with a potential love connection. Talk about the benefits of networking.

The next morning, I woke up to an email from Rebecca about the success of the event. Because of the money raised at this one event, we were able to fund a new community of artists in Kenya who were on our waiting list – as well as an overall business curriculum that had been in the works for a long time now. As she put it, “One fun night here (albeit with hard work) = a clear first step towards sustainability for women halfway around this sphere we live on.”

There are people who help you along your journey in life that you’ll never forget. Along the way, you find people who understand you inside and out, who challenge you to realize your full potential, who make you understand things about yourself you may never have realized.

Robin was one of these people. She was also a journalism student at the University of Maryland. She was hilarious. You couldn’t be in her presence without being entranced by her energy. She was also one of the most phenomenal writers I’ve ever known. She was my best friend in the whole world. She became part of my family. She looked more like my little sister than I did. She came to all of my family events after her mom moved to North Carolina. I connected her to her very first job, and introduced her to her college boyfriend. I could tell her anything without her passing judgment. She always wanted the best for me, even after we lost touch.

She was my college roommate, and my very first roommate in Manhattan. Our first year living on our own in New York was challenging – she was messy and emotional and I was anal about cleanliness and uncomfortable dealing with emotions – mine or anyone else’s. Through the challenges, we had some amazing memories of that first year in the city. We sat on our couch in our tiny apartment watching America’s Next Top Model and binging on junk food. We spent Thursday nights going to local bars in our neighborhood and singing the theme song to Winnie the Pooh on our way home. In college, we wanted to open up a new restaurant chain next to the Potbelly’s in College Park called “Fatbelly’s – we’re fatter than you.” I have lots of memories with Robin through college and afterwards, but these are the memories that were shared only between the two of us. And now that she’s not around, I need to cling to these memories because I’m the only one in the living world that can preserve them.

Robin died earlier this year. She was 25. She was engaged.

I wasn’t part of Robin’s life during her last year on earth, but we still talked every once in awhile and I always had updates on her life through mutual friends. Her death shook us all. To know that we could lose someone so quickly sent us all into shock. Now, I see her every day. She is walking down the street in Manhattan; she is sitting on the plane next to me. I close my eyes and she is rolling around on our couch on the Upper East side, laughing hysterically. She is curling up with me in my bed, watching a movie late at night. She is gushing about her first day at Conde Nast and her encounters with Anna Wintour in the elevator. She is pulling clothes out of my closet, dressing me in outfits I never would have thought to put together. She is letting me cry to her about something trivial.

Today is Robin’s birthday. I stare at the picture of us from the day we moved into our very first apartment, and I hope that wherever she is, she knows how much she meant to me. 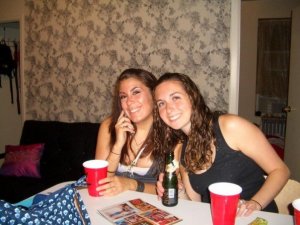