Last weekend, we took a four hour drive to what might as well have been another continent – no, another planet. The farm we visited in West Virginia, where Matt’s college friends live, is about as opposite as it gets from the life we know. Jeff and Sarah, who built their house from scratch this year, live on 11 acres of sprawling land, only have 2 neighbors in plain sight, and the only stores within a half hour drive is an old fashioned general store and a tractor supply store that sells baby chicks and guns. Yup. (Look, baby chicks!)

Like I said, we were a far way from downtown NYC. The thing is, I think farms are awesome. I think the desert is awesome too (and I’m going to one of those next month! Details to come.) I’m basically fascinated by anything that’s totally different than everything I know. Why was it so different? Let me break it down in a few photos:

In NYC, we’re greeted by crackheads when we come home. When we drove up to the farm, we were greeted by quacking ducks. 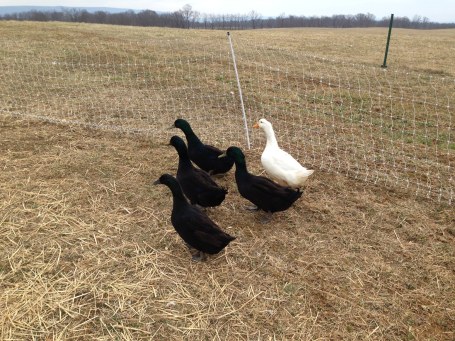 In NYC, we get delivery. In West Virginia, our breakfast was freshly laid – daily.

At home, we read the news on our ipad. In West Virginia, we shoot guns. My only targets were beer cans, I swear. And yes, I hit quite a few (in case there were any skeptics!)

And here I am with a cross bow. 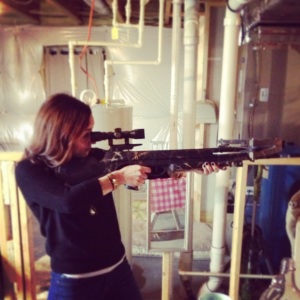 In NYC, we drink whatever wine the bartender serves. In West Virginia, we drink homemade hard apple cider from this scientific looking apparatus.

In NYC, we ride the subway. In West Virginia, we drive tractors while holding chickens. 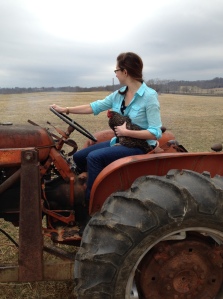 Over the next year, Jeff and Sarah are planning to buy some cows and pigs, and to plant an orchard of peach trees right next to the house. Farmers, they’re just like us, amiright?