February is over, and although it flew by, I think we’ve all had enough of winter. Plus, now we’re about to enter that part of the season where New Yorkers keep expecting it to get warm, but then it doesn’t and we all contemplate moving to San Diego. And then we come to our senses. (Disclaimer: I’ve never been to San Diego but I hear the weather is lovely.)

Anyway, here’s a quick recap of what happened in February, some from the road and some from our home. Guys, we’re nesting! Like grownups! But we’re still fun, I swear.

February began with the SuperBowl, and so I made chocolate covered strawberries with white frosting laces (Look, they’re little footballs!)

We took a quick trip to Washington DC over President’s Weekend to visit some friends. Here’s a DC/NYC skyline juxtaposition taken from the drive home.

While in DC, I ate some bacon lollipops served on a pitchfork at Founding Farmer’s. Go there. Eat them. Trust me. 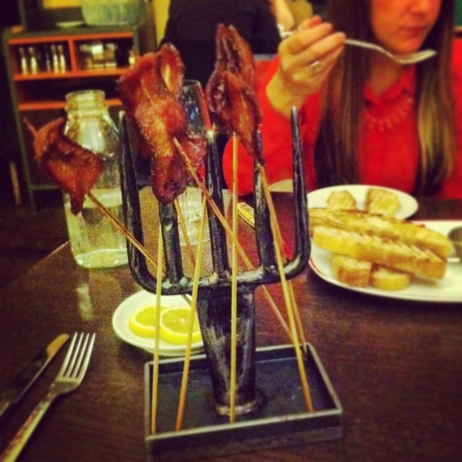 My family came in to visit our new apartment, and on the way home from brunch, my sister and I stopped for a photo by this mural on my block. I feel really hip right now.

There was a blizzard named after a friendly cartoon fish, and the view from our living room was quite picturesque. 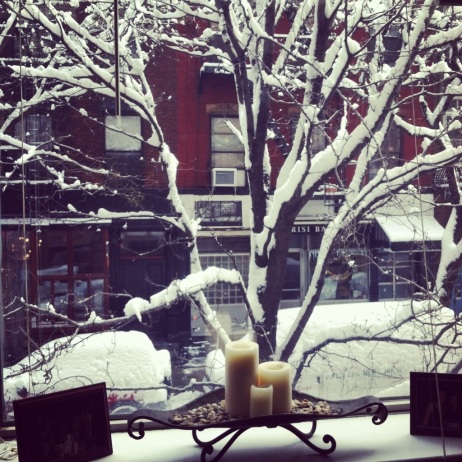 Last week I helped organize a Social Media Week event for She’s the First, and it was quite a success! Here’s a picture of the cookies we handed out – called “Insta-grahams,” (and made by the amazing Baking for Good) they had pictures of the girls we’ve sent to school printed on them.

And finally, today Hostel Bookers posted their NYC Street Food Guide, with 50 tips from food and travel bloggers who live in the city, including yours truly! Confession: Matt is the one who introduced me and many others to Freddy on 53rd and Park, so tip #47 should really be attributed to him.

So despite the bitter cold, February was pretty fab. See you all in March!