Even though the weather was horrible and rainy for the bulk of our trip, there was one thing we were able to enjoy = the lobster.  I now totally understand why people travel from all over the world just to try authentic, fresh Maine lobster – it not only lived up to the hype, but exceeded our expectations by far.

This was our first legitimate Maine lobster experience.  It was a bit of a drive from our hotel in Portland, but holy hell was it worth it.  The restaurant is nothing fancy on the inside, and the menu consists of “lobster, crab, scallops and lobster rolls,” which made ordering quite easy.  The cool thing about this place was the view – the restaurant is perched above a gorgeous rock cliff and you can look out at the water while eating.  I climbed around on the rocks before Matt almost killed me because he just wanted to eat his damn lobster already.  But you know how I feel about rock formations next to water. I must climb and play!

When we finally went inside the restaurant and sat down with our whole lobsters on the red, cafeteria style tray, we took our first bites and looked at each other with wide eyes.  It must’ve been the combination of how fresh the meat was, the taste of the saltwater that reminded us just how recently this guy was crawling around in the ocean, and the fact that this first bite lived up to every expectation we ever had. Thoroughly enjoying ourselves, we pretty much blacked out for the rest of the meal.

Lobster #2 = The Lobster Pound, Ogunquit (Round One)

Our visit to the highly recommended Lobster Pound in Ogunquit would determine our culinary activities for the remainder of our stay in Maine.  Upon arrival, we were directed to

a huge tank of lobsters, where a young boy who could NOT be more excited about lobsters herds them around the tank and allows you to pick which one you’ll be eating for your upcoming meal.  We dubbed him “The Lobster Nerd.”  We were really excited about lobsters too, so he really took a liking to us.  He even let me hold our lobster before throwing it into the steamer where it would later become our dinner.  There was something really upsetting yet strangely satisfying about this.  Matt and I each chose a 1.5 pound lobster, both enormous.  We asked what the biggest lobster the nerd had ever seen was, to which he answered, a little over four pounds.  He suggested that the next night, we split a four pound lobster.  And it was decided. 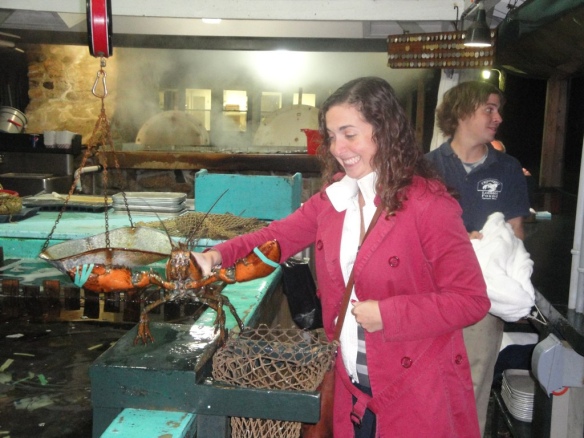 On our last day in Maine, we didn’t want to spoil our appetite for what we knew was to come later, but we still hadn’t tried the highly recommended lobster rolls at the Lobster Shack in Ogunquit.  Despite my best attempts to convince him otherwise, Matt made us share this very delicious lobster roll for lunch.  He was right in restricting us.  Read on.

We had been preparing for this moment for the 24 hours leading up to it.  When we arrived back at the pound and walked out to the lobster tank, the “Lobster Nerd” had anticipated our arrival. His face lit up when we walked outside, and he rushed to the back of the tank to give us the ginormous lobster he had pre-chosen for us. The crustacean we were looking at was an absolute beast.  When our monster was placed on the scale, he weighed in at five pounds.  The Lobster Nerd told us this was one of the biggest lobsters he had seen all season, and we knew it was meant to be.   We approved him, and about twenty minutes later, he was served to us, and we devoured what was our last, most grandeoise, Maine lobster.  The size of his claw against my hand says it all.