On day three in Argentinian wine country, we wanted a bit of a break from drinking in between our two full day wine tours. We walked past a sign in town that showed a picture of people horseback riding in the mountains and it was decided. We asked our hotel to set something up, and they graciously took care of everything. We were driven up through the mountains, through completely desolate land for what seemed like hours, until we came across a tiny little village and our driver let us out at a little log cabin with a horse barn next door. It was like out of a freaking fairytale.

We were told by Pablo, our guide, who spoke very little English, which horses to step up onto, and he demonstrated how to give them commands using the reigns. I had rode horses before, when I was very young, but this was Matt’s first time. Lucky for him, he got the normal horse who understood how to listen to commands. I nicknamed my horse “Loco,” since no matter how much I tried to control her, she would just gallop away down the path when she wanted, stopping to eat some leaves whenever she felt the need. Matt said one of the most hilarious moments was hearing my horse pick up speed galloping away while I screamed, “stopp!! stop it!!” Despite Loco’s wildness, she was a pretty good horse and could tell when I would start to get nervous and she did slow down just a bit when I pulled back on the reigns.

Aside from Loco’s little diversions, it was a lovely ride through the mountains. Pablo kept going off far ahead of us, and was usually out of sight so it sort of felt like Matt and I were alone with our horses, trotting through fields and mountains and looking out at panoramic views of the Andes.

We rode for two hours, and when we got back to the little log cabin, Pablo ushered us inside where there was a table and two chairs set up in front of a fireplace, with fresh steak cooking over the fire. The table was set with two place settings, a beautiful tomato salad and a bottle of red wine. He took the steak off the fire and served it to us, then excused himself and closed the door to the log cabin so Matt and I could enjoy a private lunch by the fire. We giggled a lot because the situation, as romantic as it was, was sort of ridiculous – we felt like we had the Andes all to ourselves all morning and now we were having a private little lunch in an adorable cabin together. Upon telling this story to friends when we got back, they said it sounded like an episode of The Bachelor, a show I’m embarrassed to admit I’m familiar with.

We enjoyed our bottle of wine, finished lunch and eventually said goodbye to the little mountain town we had spent the day in. When we got back to Mendoza, it was still early, around 4 pm, so we decided to check out the wine tasting bar across the street from the hotel. We were served our flight of Malbecs, and an hour later our buzz had taken us to the outdoor pool of the hotel and we were swimming even though it was 60 degrees outside. So much for our sober day in wine country. 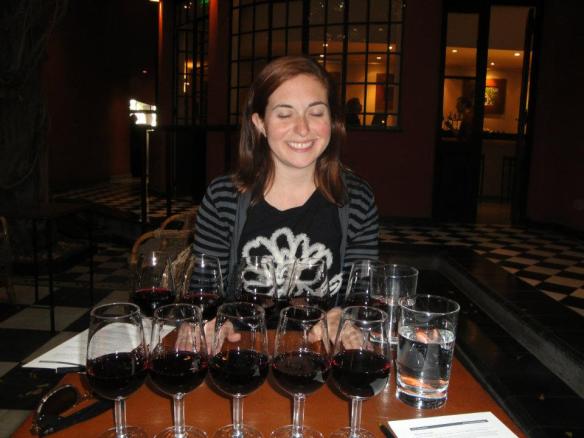 1 thought on “A Horse Named Loco”