My summer of 12 hour workdays came to an end when my team and I traveled to New Orleans to put on a concert commemorating the anniversary of Hurricane Katrina. I’ll spare you the details, since I don’t want to make this a work related blog, but we basically paid a high level spokesperson (Faith Hill) to perform a concert in New Orleans to honor those who have stayed in the area in the five years since Katrina hit. I wrote about this in communication materials, spoke about it to media and spent months preparing for it, but I don’t think I actually GOT it until the evening of the actual concert. See, we made sure the theater was filled with local residents as well as people who worked at relief organizations in the area. About an hour before the concert, we realized a mistake had been made, and we had about 50 extra tickets right in the front orchestra section.

After I got over my panic attack and readjusted some of the seating, I took a handful of tickets, and right before the concert started, I made my way up to the upper balcony section. I went up to a couple and asked if they were with a relief organization. They actually said, “No, we’re with the fire department.” I looked at them quizzically and said, “Well, that’s certainly a relief organization,” and handed them two orchestra section tickets. They were amazed, and thanked me before going downstairs to take their upgraded seats. After handing out a few more tickets, word must’ve spread throughout the upper balcony to what I was doing. One elderly man came over to me and tapped me on the shoulder as I was giving out some more tickets to some folks from Homeland Security. He said to me, “I hate to ask, but is there any way you can upgrade me and my wife? We’re sitting all the way up there…and I know you’re giving these to relief organizations. I’m from St. Bernard’s Project, and I helped save thousands of lives when the hurricane hit.” I smiled, and handed him the two tickets I had that were closest to the front. He thanked me, and I said, “no…thank you!” I was thrilled to be the person to give something to this man who had clearly given so much to his community.

Later that evening, as the lights went down and Faith Hill took the stage, I was amazed that my team and I had just put on a large scale concert. But as amazing as that feeling of accomplishment was, the part of the evening that stood out most was being able to give something to that man I met in the upper balcony. In all communication leading up to the concert, we kept saying how this concert was about the people of New Orleans. And as great as it was to have coordinated such a high profile event, what we had been saying all along really held true, the evening wasn’t about the theater we had decorated, the production we had coordinated, or the celebrity we had signed on – it was wholeheartedly about the people of the area. 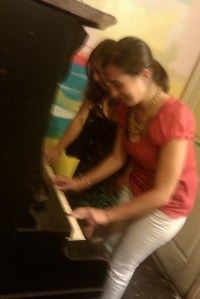 After the concert, my boss took us out to show us the “real New Orleans,” on Frenchmen Street. Again, I finally understood what people love about this town. We entered a small, dark bar, where there was a five piece brass band playing and four or five couples dancing in a way I had only seen in old movies. The quickness of their feet, the energy they exerted into the room, you couldn’t help but stop and stare…and wish you could dance like that. I felt like I had been transported to the 1940’s. And I loved it. After finishing an Abita beer, we headed to the next bar, where there was another brass band playing, and a female singer who had the most amazing voice, again feeling like we had been transported to the 1940’s. There was even a piano in the ladies room of this bar. It was hilarious, and incredible – like nothing I had ever seen before.

I finally understand why everyone falls in love with this town. Once I veered away from the chaos of Bourbon Street, met a few locals, and entered a few dark jazz clubs, it all began to make sense. And I won’t even get into the part of the evening when we followed the “bicycle balladerist” out of what our cab driver dubbed “the safe zone” and got some po’boys in the ghetto of New Orleans. Another experience I won’t soon forget. Our night ended with the Westin room service guy delivering complimentary ice cream to my room at 4 a.m., while I was devouring po’boys and other New Orleans delicacies on my bed with my bosses. Now, where else can you have an experience like that? 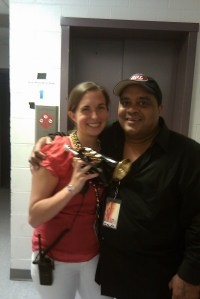